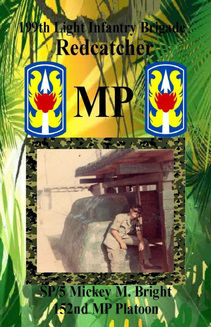 Here is the back of the book Mickey put his heart and soul into his book about his three tours in the Vietnam War. He brings to life the men he served with and treasured as friends as well as the Vietnamese people he grew to know and respect. He describes everything he saw and felt about the country in vivid detail. That includes the horrors of war as well as the men's feverish efforts to block their worries and fears in their off duty hours. Mickey's humor comes through when he writes about being invited to supper at a Vietnamese Police Officer's house and finds he's eating dog meat. Or when he becomes really nervous on patrol alone and thinks he's going to confront VC in a village cemetery only to find he's face to face with the harmless village bum. Men felt pressure and stress all the time. They didn't know where the enemy was. There wasn't a front lines or a safe area even on base. They could never fully relax. The horrors of this war led many soldiers into a fog of drugs just to cope. Smoking marijuana was as popular as smoking a cigarette. The young men were drafted during the hippy drug era. Many of them had tried drugs, marijuana and drinking alcoholic beverages in the states. In Vietnam, drugs were cheap and very accessible. Beer was cheap at the PX and kept under the bunks by the case. Most times, it was consumed warm. The camaraderie between the men in their off time led to addictions that had to be faced when they went home. For many, drugs became a way to sleep in a stupor without fear and nightmarish images of death haunting them. The years that Mickey Bright was in Vietnam, statics show that more men went to the hospital because of their addictions than those with wounds. At the time, his war stories wouldn't have been wise to write about in letters to his worried family. We see the standoffs as Mickey describes them and get a feel for what his duties were like as a military policeman. Often something about Vietnam reminded him of his family and home in Nevada, Missouri. It's only when he was midway through his third tour of duty that he felt he'd had enough of this strange land and war. With new men coming in all the time, he dwelt more on the friends he lost, and the ones that went back to the world that he missed. Then there were his memories of Lei, the pretty Vietnamese girl he loved. When she was killed during a fire fight in Saigon, Mickey didn't have a reason to stay. He was ready to come home. If you're interested in learning what it was like for a good many of the soldiers in the Vietnam War, this book will enlighten you about addictions many of them had when they went to Vietnam and struggled with when they came home. Look on Amazon for the book and the Kindle store for the ebook. Barnes and Noble's Nook store will have the ebooks soon. Smashwords.com have the ebooks available now. As more venues open up, I'll let you know.